The best solution for small rooms 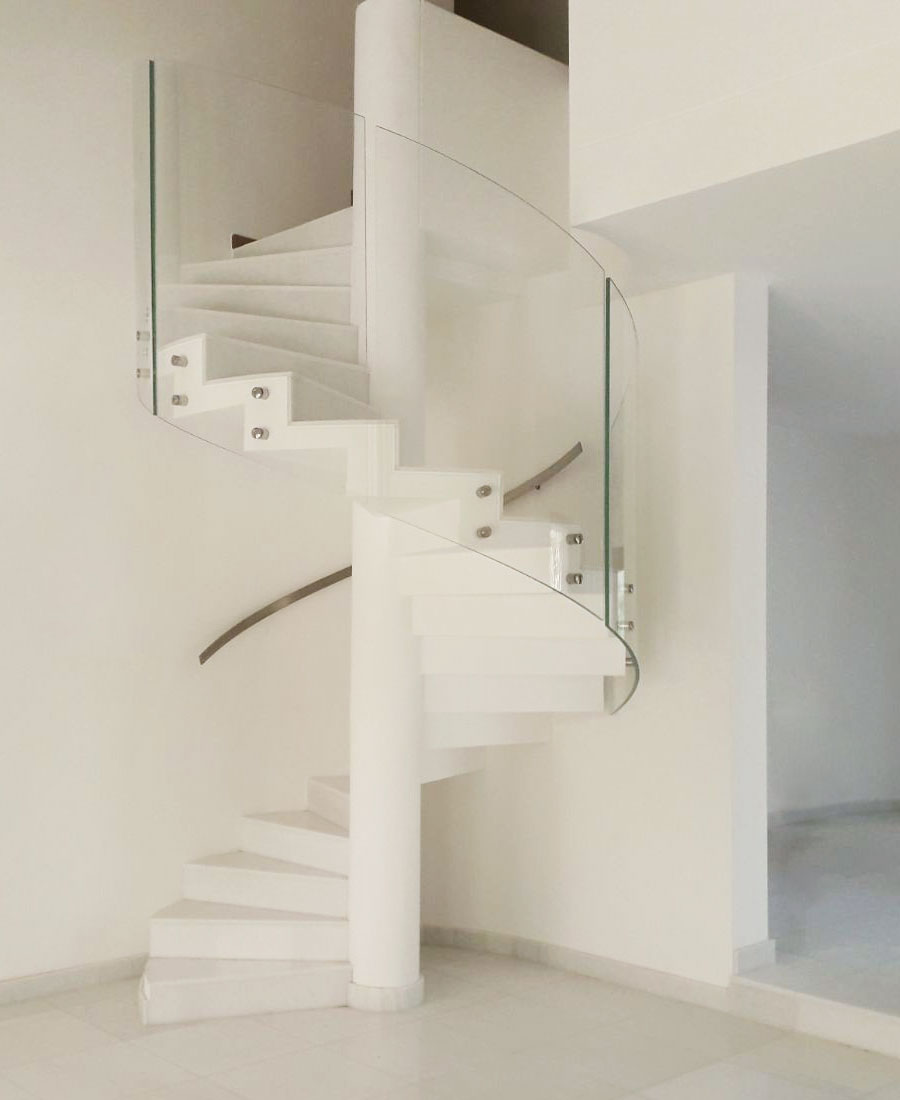 The choice can fall on spiral traditional staircases , with circular ground plan, adapting the diameter of the useful space, or spiral staircases with a square plan, featured by more modern lines. Finally, semi-spiral staircases are also available and represent a perfect fusion between the previous ones. 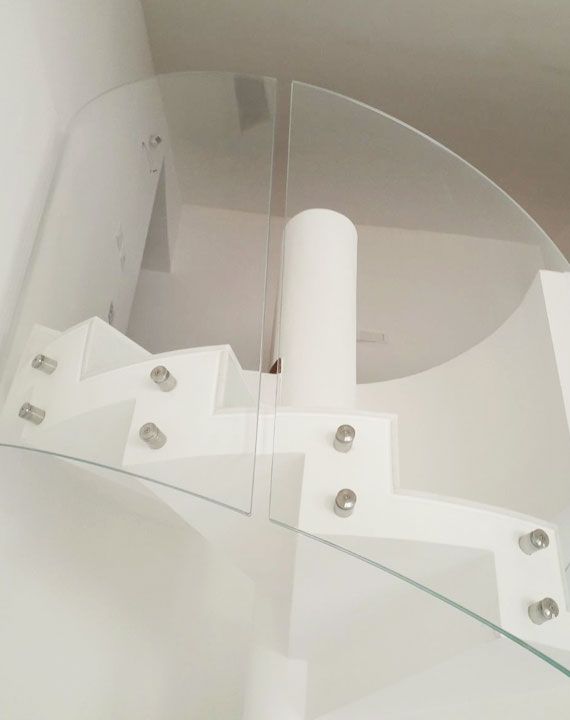 Comparing a traditional staircase with a spiral staircase, the first thing to be noticed is how, in this latter one, the tread, which is the part of the step in which our foot rests during the ascent or descent, is considerably reduced in size.

This is because the steps of a spiral staircase are of variable width and triangular shaped instead than rectangular shaped.

This allows to gain several useful meters because the smaller steps are screwed around a central axis, adapting the structure to height development.

The diameter of a spiral staircase varies according to the needs of space, from a minimum diameter to considerably greater solutions.

Spiral stairs in any key

The structure of the spiral staircase makes it an architectural element for interiors that can surely enrich the environment in which it is located.

The functionality of the element will be combined to the attention to the aesthetic impact by installing a spiral staircase.
That’s why it is better to choose a product that fits harmoniously into the environment with the furniture style.

It is also fundamental to rely on serious and competent companies, such as Archiscale, leading company in the production, assembly and installation of customized staircases in an area between Carpi, Sassuolo and Modena.

Contact us for the design of your customized spiral staircase. High quality is a standard in the realization of our products! 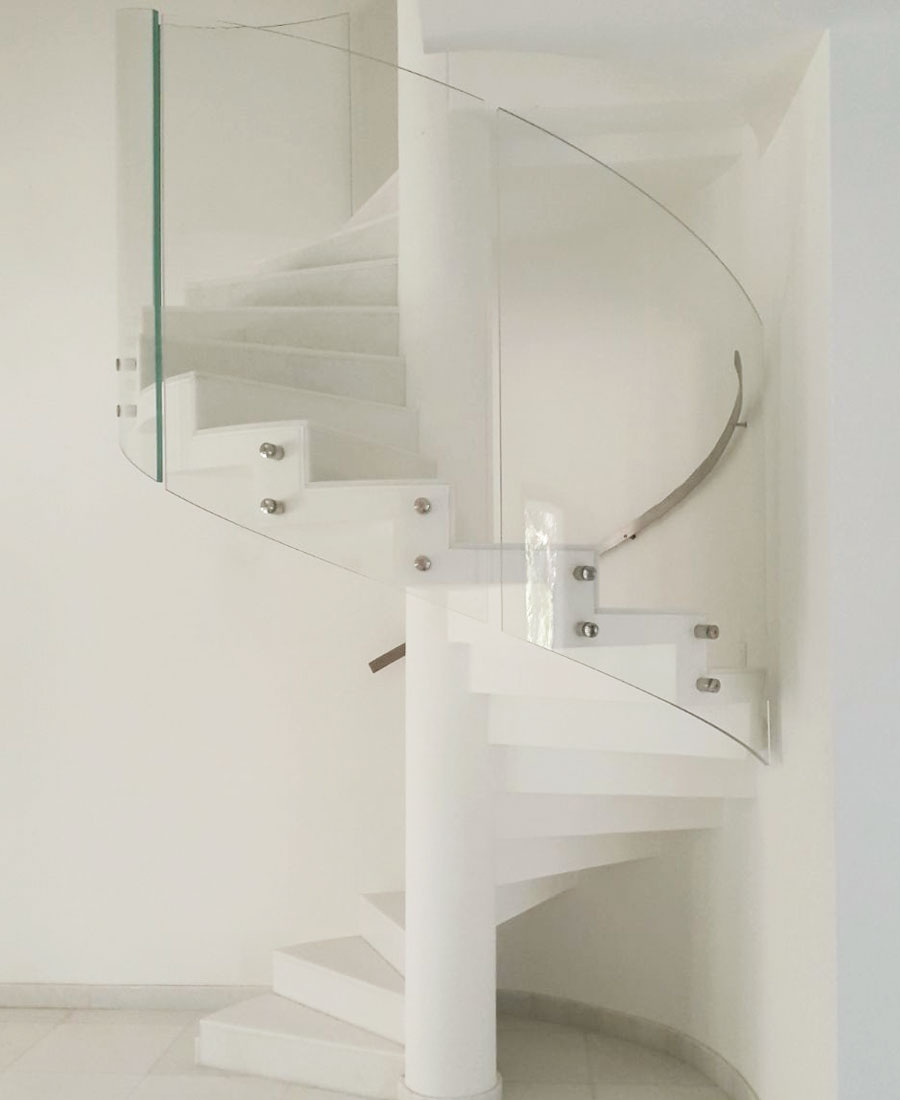 We make internal and external staircases completely customized to your needs, advising you on the best materials and functional housing solutions.

It is fundamental to choose a structure that is perfectly in line with the style we have given to our environment, so as to give it added value and make the staircase an architectural element capable of enriching the room in which it is placed.

Archiscale, leading company in the production, assembly and installation of customized staircases in an area between Carpi, Sassuolo and Modena, guarantees the creation and installation of a unique piece of craftsmanship, able to combine functionality, elegance and durability over time.

The choose is among different space-saving solutions (just 100 cm!), the traditional spiral staircases, the helical staircases and the square-shaped staircases. Modern steel and glass trim or, the more classic ones, in wood and wrought iron, are available.

Check the catalogue and the available models and contact us for any further information!

For any information contact us at the following addresses, our consultants are at your disposal to illustrate in detail the characteristics of our stairs.
Mail: [email protected] - Tel: +39 059 670117 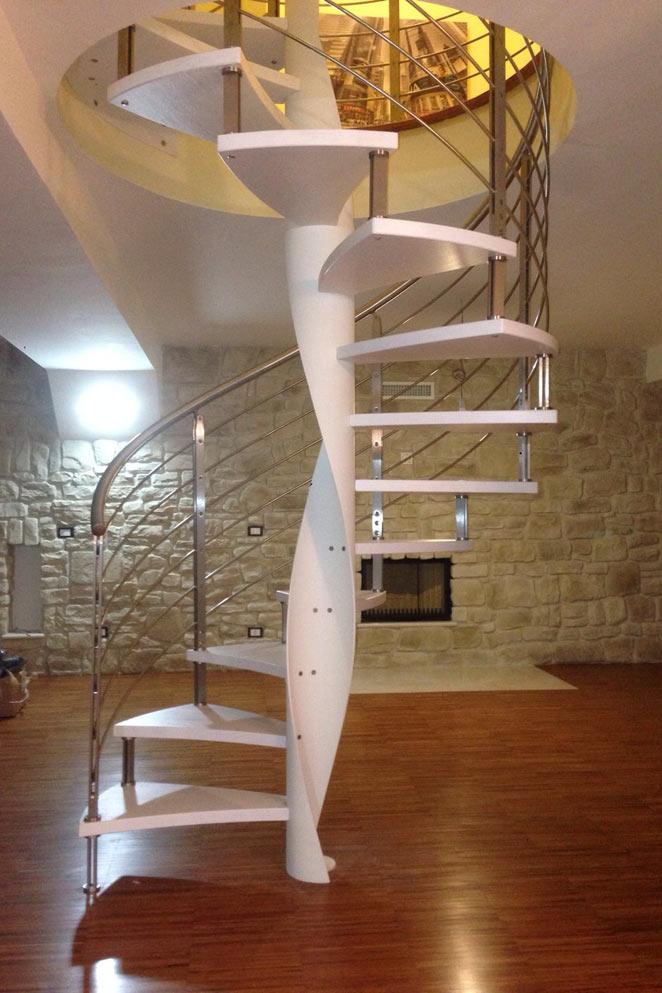 It is certainly among the most interesting solutions if you are looking for originality and design. 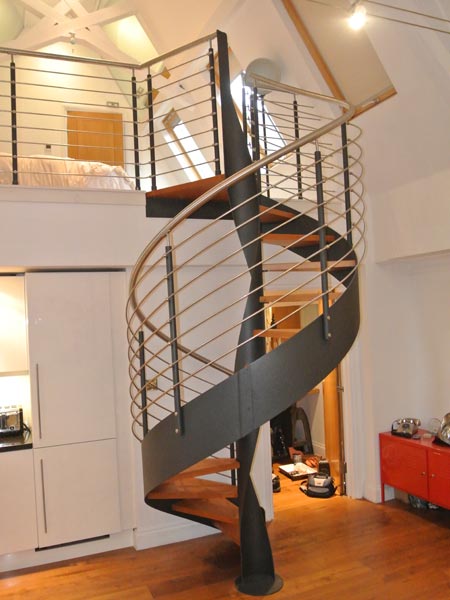 Staircase featured by handrails and rods made of stainless steel, iron columns and pole and varnished wooden steps. 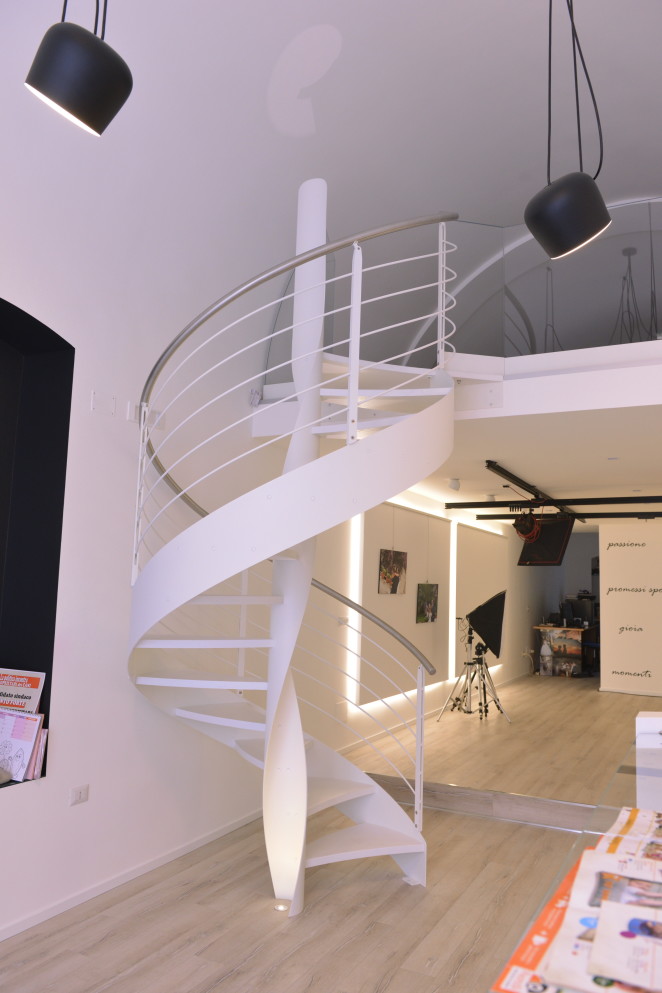 The supporting structure of this spiral staircase, featured by the support of big bands, consists of an iron pole, while the railings, simple and linear shaped, are made up of iron elements..

The wooden steps, instead, represent the modern or more traditional element that binds the structure. 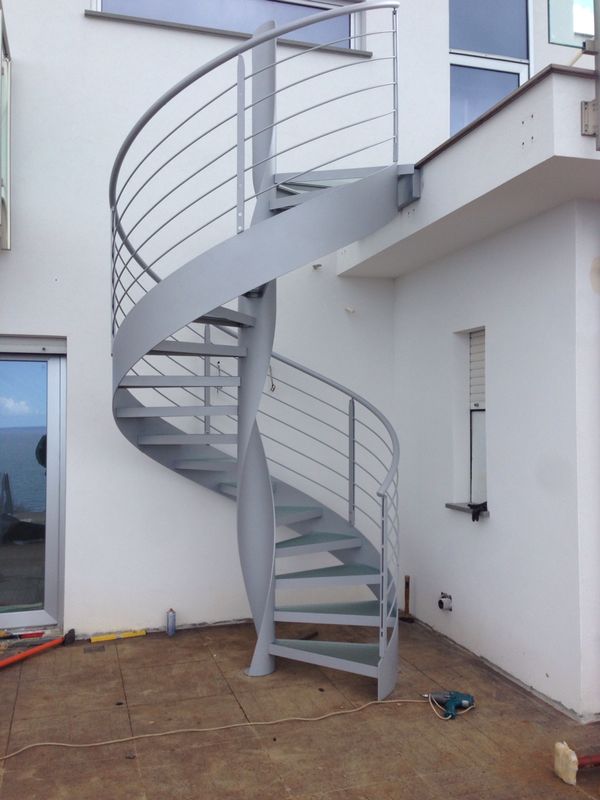 Spiral staircase suitable both for indoor and outdoor installation, made of iron spiral support pole and railings.

The steps are made of iron and glass. 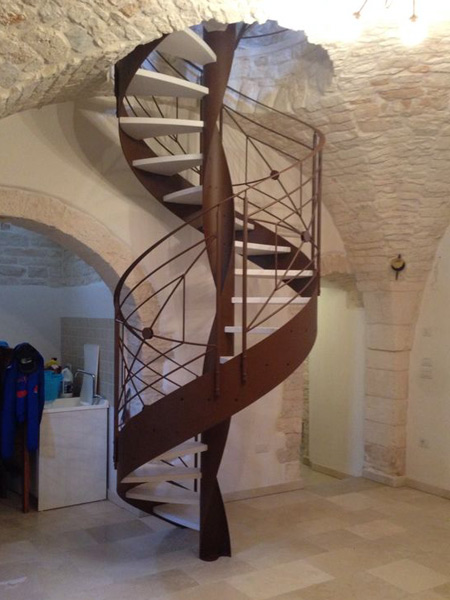 Indoor staircase characterized by a spiraled iron pole; the railings, adorned with geometric designs, are also made of iron, while the steps are made of wood.

A staircase able to create a striking combination of traditional and modern styles. 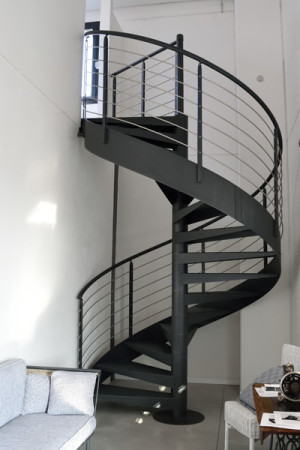 Spiral staircase featured by an iron structure and stainless steel rods; the steps are non-slip and remind those “industrial” ones.

Perfect for embellishing environments with modern furniture, it can also create a pleasant contrast if located in classic rooms. 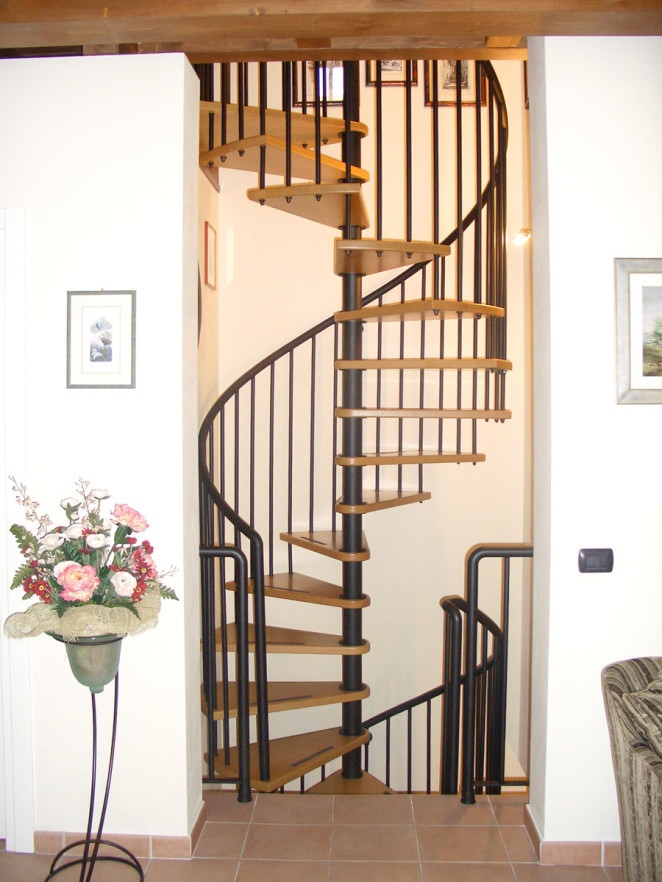 Traditional spiral staircase, with a circular ground plant, made with wooden fan shaped steps and iron pole and railings. 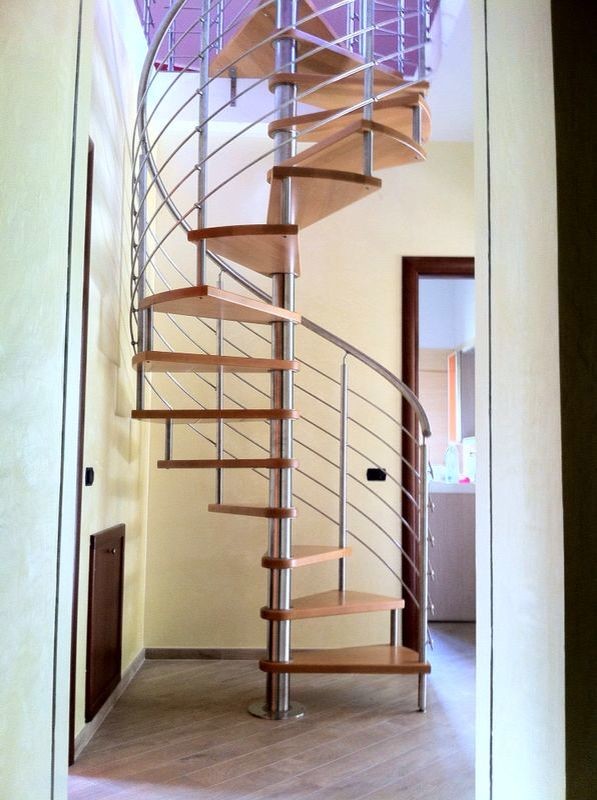 Spiral staircase featured by a circular ground plant, consisting of extremely simple lines shaped central pole and railing both made of stainless steel.

Very modern structure able to make a nice contrast with the wooden steps. 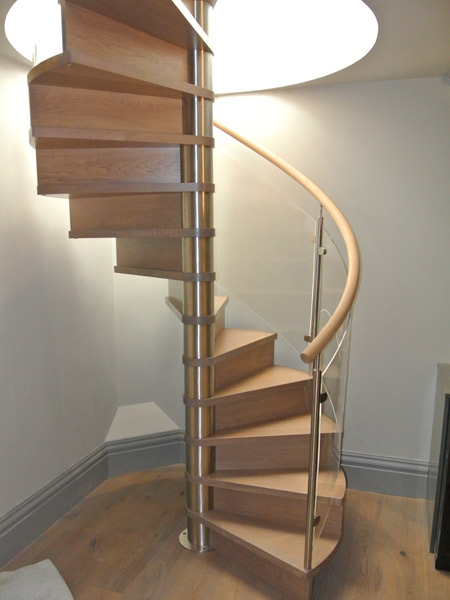 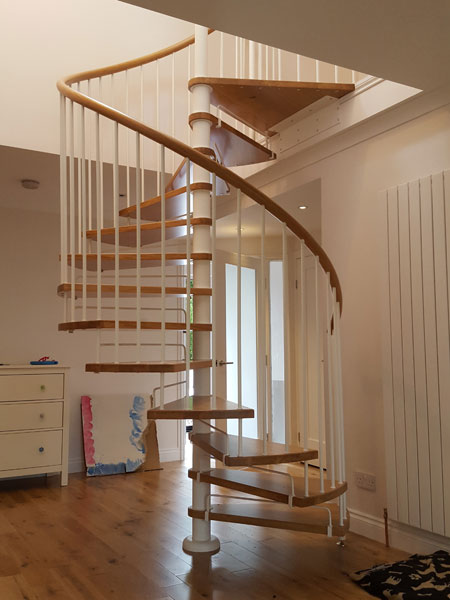 Staircase featured by wooden tread, iron railing and wooden handrail; pole and cylinders are iron made 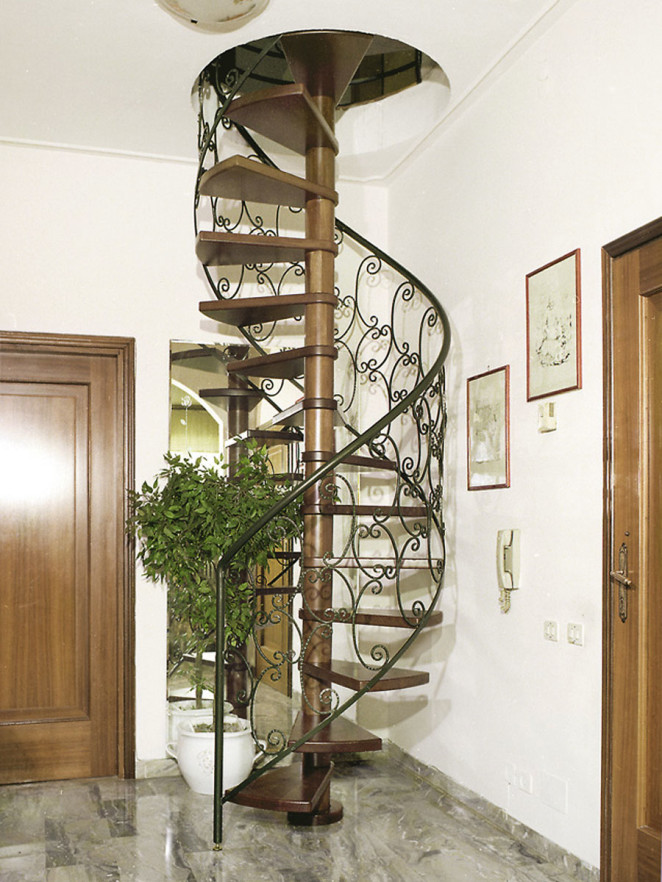 It is perfect for classic style homes and rooms. 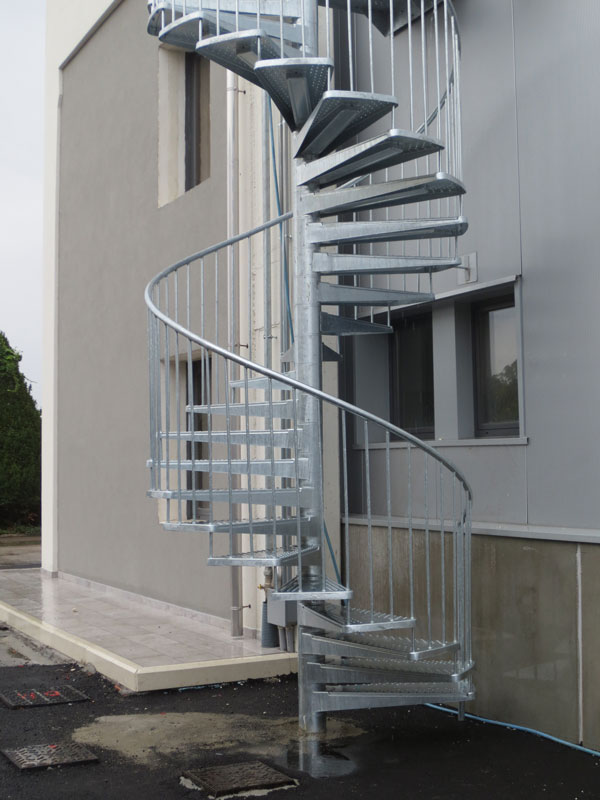 The railings are composed of a handrail and caposcale made in tubular iron (diameter 42 mm) and iron vertical columns (diameter 16 mm).

Spiral staircase suitable for outdoor environments, with a square base plant, entirely made of iron..

The material of which it is made is suitable for both indoor and outdoor environments, as it is weather resistant. 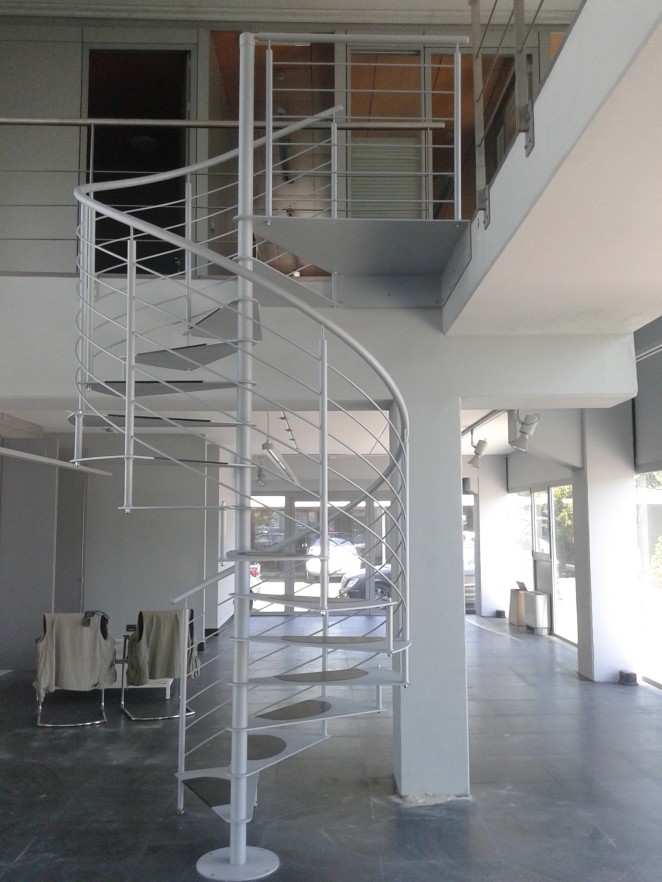 Spiral staircase featured by a definitely original and modern design, entirely made of iron, characterized by simple and essential lines.
The steps are characterized by an anti-slip surface that occupies part of the tread, which integrates into the structure till turn to a sort of decorative element. 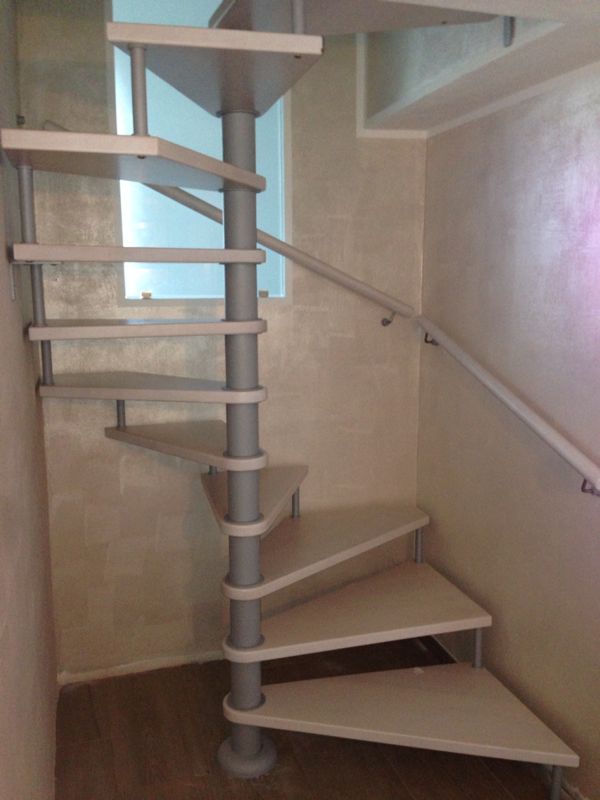 Spiral staircase with essential and modern lines, entirely made of iron, suitable for any type of environment. 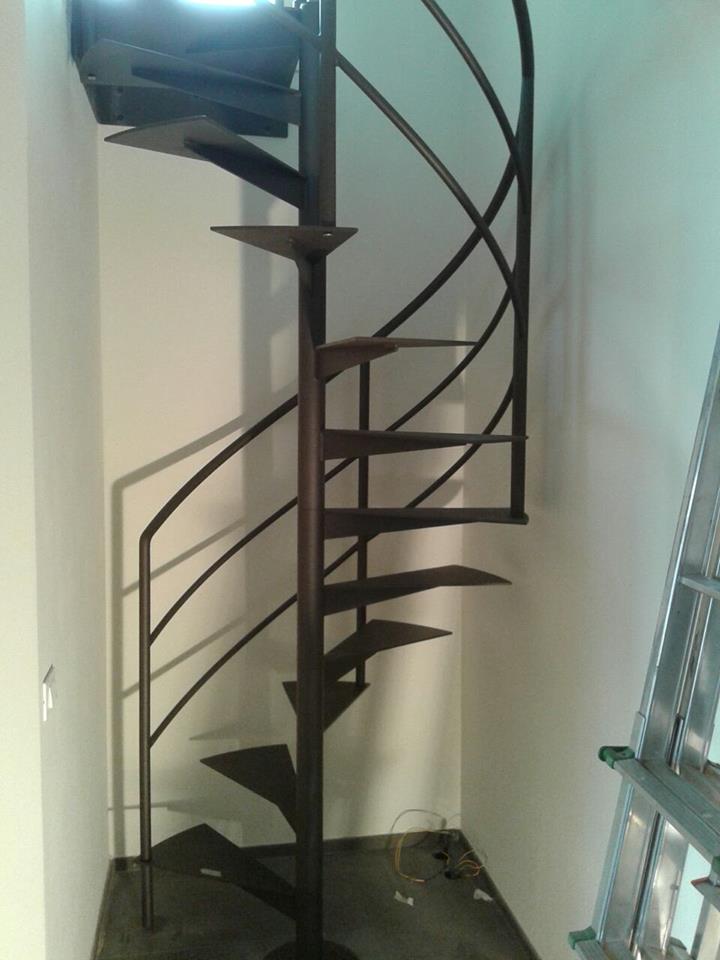 Spiral staircase, of simple and essential shape, entirely made of iron and featured by a light and slender structure..

We are not simply "producers" of stairs.

We create unique products that become real furnishing elements; our interior stairs, in fact, are made to measure and treated in every detail.
Our laboratory, the shop and the showroom are based in Novi di Modena: here you can choose from a wide range of products of different types, with various proposals about spiral staircases, open staircases and special ones. Request information without obligation.

We also deal with 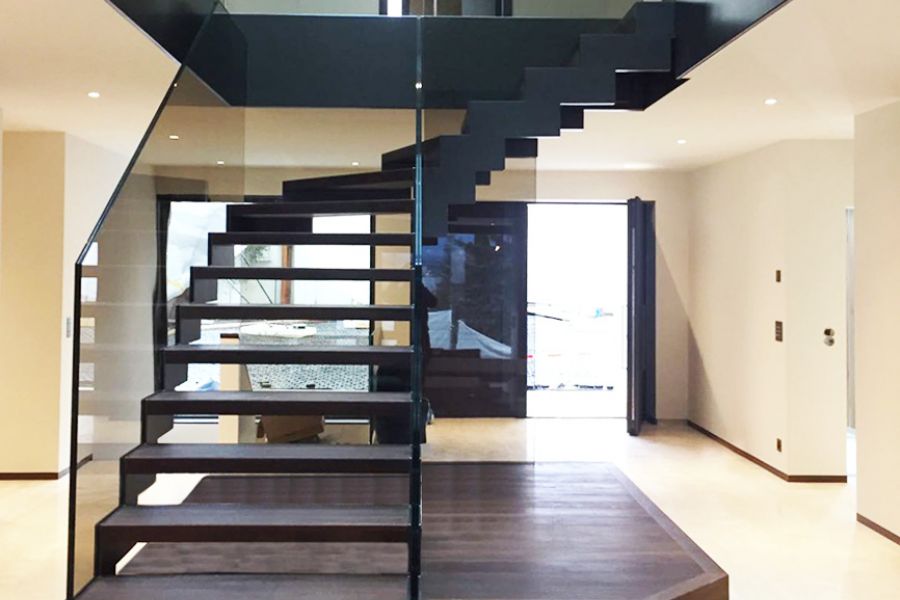 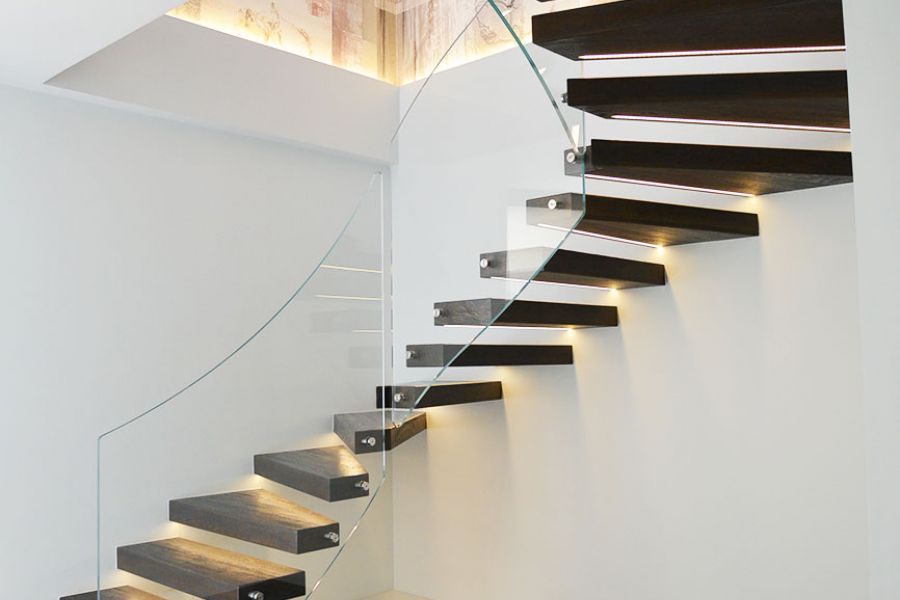 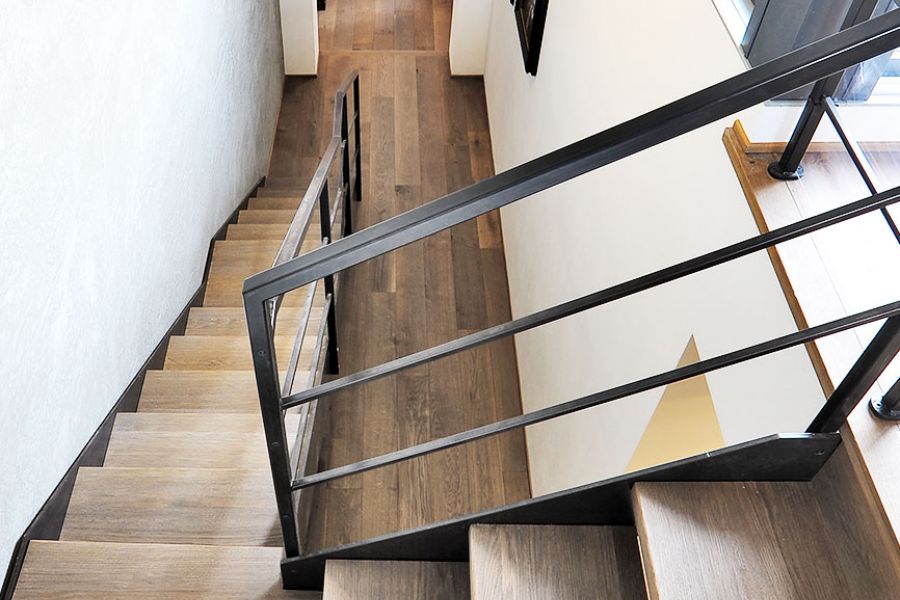